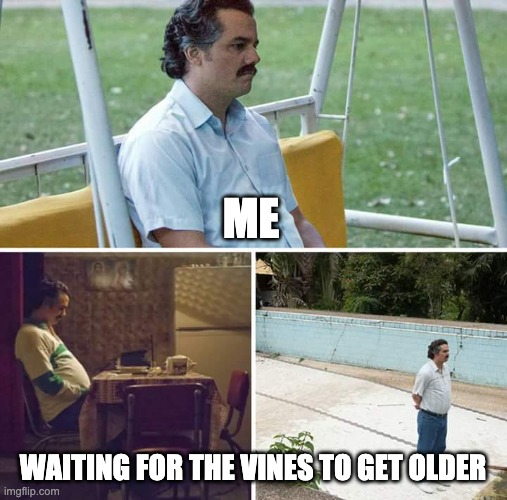 You often see "Old Vines" touted on labels yet many producers don't actually say how old these vines truly are. Just like "natural wine," there is no legal definition. Man, they sure do make it approachable to be a wine consumer. And you wonder why spiked seltzer sales are booming.

Australia has many of the world's oldest vines. Out of frustration for the lack of transparency, a group of winemakers in Australia joined forces to create the Barossa Old Vine Charter in 2009.

Their "definitions" are decently agreed upon amongst the global wine community:

I love Australians, but to me personally, vine age isn't impressive until you hit the 50+ years mark. Like, if something was planted in 1985, I'm not gonna sit here drooling over the "old vine" Cabernet you planted in Napa so that some dumb critic would give your heavily oaked, overripe, too-high-of-alcohol, jammy cAbErNeT sAuViGnOn 100 points. Especially not when you consider that truly old vines were probably ripped up to plant said Cab. But when that bottle of Zinfandel is sourced from the Lodi or Sonoma, and the vines were planted in the 1880's, my head may turn a little bit. Ok, maybe more than a little.

But why do old vines matter?

Well for starters (and this isn't proven so chill out), there's a reason why a particular grape variety continues to grow in a particular site. Because it's thriving there. Whoever planted it was either lucky or onto something. The universe wants that site to make dope wine from those particular grape varieties. Take producers like Broc Cellars or Louis Antoine Luyt for instance. They prioritize old forgotten vineyards over popular grape varieties. And talk about terroir representation! The longer those vines have been there, the more the vigneron is representing that vineyard site. The producers we're interested in are practicing natural winemaking because they want to showcase the terroir as much as possible. They're not busting their asses to revive abandoned ancestral vineyards by hand so that they can put "Old Vine" on their label. Noteworthy, however, is that they're transparent about the vine's age, unlike most of their conventional winery counterparts.

Some of the vines that Louis Antoine Luyt's works are ~250 years old! Who cares if the grapes aren't Cabernet or Chardonnay?! Since he works in Chile, you must presume those ancestral vines were planted by Spanish Missionaries.

Ok. The technical reason for why old vines are prized has to do with yields. The older the vine, the less berries it yields. The less berries on the vine, the more nutrients is being allocated to each individual berry. The plant is going to disperse the nutrients (that it has been working so hard to garner) evenly throughout the berries, regardless of how many there are. This means that grapes from old vines are more concentrated with healthy goodness which, after fermentation magic, translates into more flavor for us grape juice gulpers. Additionally, the vine's roots don't stop digging for water and nutrients. So the older the vines, the deeper the roots, making them more resilient to droughts. This is why a lot of these old vines are dry farmed. They've grown up to the point where they can feed themselves in many scenarios. And just like old humans, these senior citizens need more TLC than younger vines, so typically they can only be farmed by hand (even if you wanted to use mechanization).

Lifecycle of a Grapevine:

So old vines definitely matter. But how old are we talking? 35 years isn't going to move the needle, although it's more impressive than, say, 10. 50 years will get the conversation going. Once you get to 100, I might freak out a little bit.